In more than 20 years of working with joining technologies, Bernard Tollet has never been bored. “There are so many levels to be involved in: design, purchasing, production and quality assurance,” says the 57-year-old, who had a long career at Volvo Trucks and who is now employed at the Technical Centre for Mechanical Industries (CETIM) in Saint-Etienne, France, as an assembly technology engineer. “I have worked in all four departments; never saw the same thing twice because everything is always evolving.” 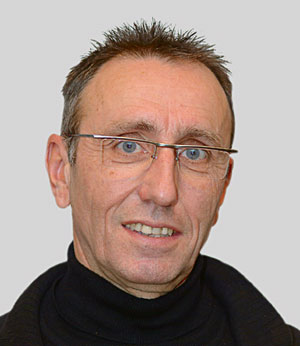 Tollet’s long experience has taught him that most fatigue failures of bolts are caused by incorrect mounting or tightening. Manufacturers therefore have to focus on controlling their bolt tightening processes as the main way of reducing fatigue failure in their bolted joints. While other causes of fatigue failure include machining of parts, heat treatments, surface treatments, design, choice of materials and conditions of use, tightening accounts for more than half of all cases.

"The issue for a design engineer is: "What amount of preload do I need to make the joint withstand static and dynamic loads?" says Tollet. "Whereas all that matters for a producer are: "How do I control the amount of preload installed in the joint using available tools?" 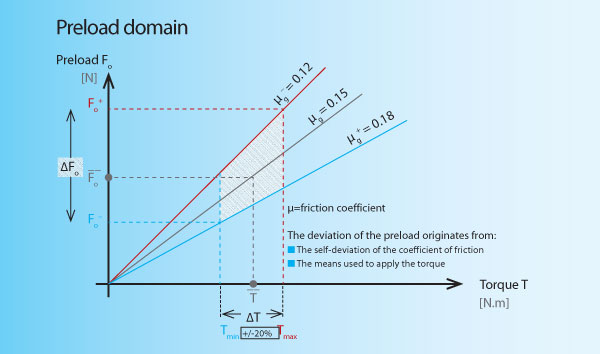 Control of the fasteners is normally linked to control of the torque-tension relationship (see figure 1, above) of the assembly, namely the friction involved in the assembly. Lubrication is the most common way to get low and even friction conditions in the joint. Low friction means less tightening torque is needed to achieve the right clamp load, and also gives much more predictable behavior of the joint. Another way to decrease friction is by using coatings on the fasteners. “Only 20% of nuts and bolts sold in Europe feature a friction coefficient requirement (a surface treatment for friction control)” says Tollet. “These are mainly used by railway, automotive, aeronautics and steel construction industries. And when all is said and done, applying a surface treatment for friction control represents an increase of only 3–5% in the base cost of a fastener. The choice of fasteners and verification of their specifications are the responsibility of both the design and the purchasing department.” 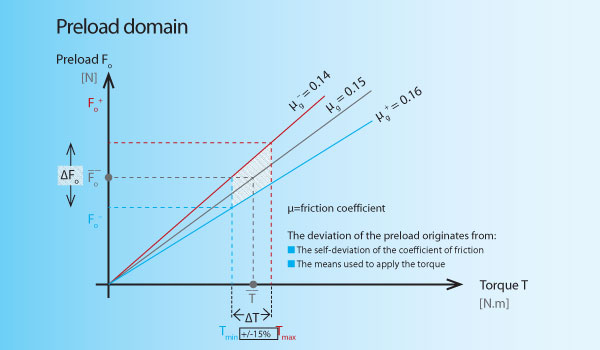 Controlling tools and tightening method means investigating each characteristic and parameter of the tightening process. The most common tightening method is torque tightening, which involves applying a known rotational force to the assembly to achieve what’s known as preload, or clamp load. This is the tension in the assembly which has been specified by the design engineer for the best performance of the machinery. According to Tollet, torque tightening using correctly calibrated tools is normally sufficient to achieve a good clamp load for most industrial bolted joints. But sometimes the function of the bolted joints only allows small differences between maximum and minimum ­allowable clamp load (see figure 2, above). “Engineers need assurance that the preload achieved in production is within the required range. For these cases, you might need to consider switching from the torque tightening process to another method which might be more accurate or more suitable for the particular production conditions. The big responsibility of control of the tools rests with the production department. It has the responsibility for ensuring the required tightening operation has been completed, in sequence when necessary, that no bolt has been tightened twice and that all the other assembly items (especially washers) are in place.

The business case for tightening

Welcome to the Nord-Lock Group